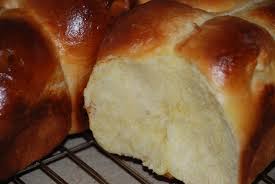 Everyone who ever  dinned out knows that thick cut french toast is made from Jewish egg bread”Challah”.Now Ihop comes along and it almost seems that they are deliberately advertising it as Brioche (French Egg Bread) which is basically not sold in the U.S. however Challah is. It almost appears that was done deliberately in order to avoid the name Challah and thus anything remotely related to a Jewish food or product name.

Challah and brioche, while similar, are not the same bread at all. The most important difference has to do with the fact that challah is part of Jewish tradition, and is kosher to eat with all meals—so it is not made with dairy, i.e. butter. Brioche, on the other hand, is French, so of course it is made with butter!Jan 7, 2014

A while back the Dunkin Donuts  were advertising ”Artisan Bagels”.We believe that too was  some sort of  an attempt to Dejudaising their Bagels that they were selling.

We say avoid this so-called new named “Brioche French “Toast until they change it to  Challah FRENCH TOAST.