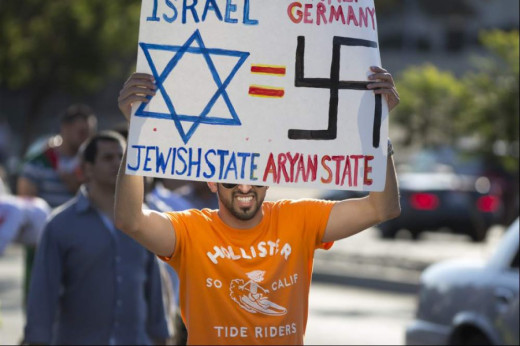 An Exercise In Bigotry.

We’ve been around for many years and We all met our share of Jew haters. I heard all the lines and more of my share of Anti Semitic taunts and messages.Sad to say that a good deal of the time it was spoken right in front of us as We were all at one time may have been mistaken for Non Jews
Most of us never denied the fact that we are Jewish and most are. ery proud of it yet some ashamed
I knew someone in the Marines and took plenty of Anti Semitic brow beating on a daily basis as any Jew can verify to that who served in the Armed forces .
However today the Jew haters cloak there hated of Jews in the veil of Palestinian rights.

They couldn’t care less about the Palestinians but will say that in order to come across as warm caring compassionate people but in reality they are nothing more than hard core Jew Haters.
What they are really saying is ”the hell with the “Jew Bastards”
Today we witnessing bigots such as the likes of Jeremy Corbyn as he rears his ugly head on the world stage.

When we hear and read stuff like that we have to wonder does these protesters really care one Iota about the so called Palestinian plight?

News reporters are infamous for this new way of reporting this sham of these bigots venting their frustrations of being a Jew haters and at the same time wanting to come across well all Caring folks.
Do they really care about the poor Palestinian’s?

Not really they couldn’t care less about them in reality. Do you hear them being vocal about The Kurd’s or People in Africa or any of the worlds downtrodden people …answer “No” enough said/end

Jewish shops  are targeted by Anti Semitic  crowds …read on…..

Terrorism Should Never Be Given A Bye « The Lerman Report®/

Massacre in France: Why Were Jews Targeted?–

‘Anti-Semitic’ riots: ‘We may leave France‘ – The Local-/

Series of Muslim Attacks on Jews in France Over/

No Commenting On This Post Any Comments Sent will Be Trashed