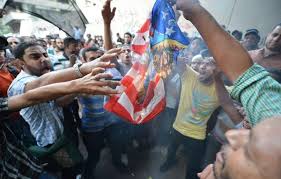 Basically in Arab Mid East  we see a well orchestrated protests and riots , can Europe With A Large Middle eastern population, such as in the western nations such as France England and Germany be next ? Can unrest make its way to Europe as well as the old Soviet republics  such as Azerbaijan Uzbek Turkestan and the rest of the pan Turkish Moslem nations , can Nato squelch any massive riots if necessarily?

Lets hope this  doesn’t materialize in the near future /end