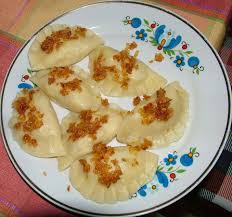 I’m amazed that this kind of thing doesn’t happen more often in competitive eating: A Ukrainian man ate 10 dumplings in half a minute to win first place in a contest, then died, according to local news reports. Ivan Mendel, 77 (there’s your problem) was competing in the town of Tokmak, in the southeastern Zaporizhya region. And here’s your not-likely-to-be-duplicated-ever lead paragraph of the year:

KIEV (Reuters)- A 77-year-old Ukrainian man won a jar full of sour cream for coming first in a dumpling eating contest and then promptly died, local media reported on Wednesday.

According to organisers of last weekend’s contest, the dumplings used were filled with potatoes and had been bought from a local supermarket.

They have refuted suggestions the contest killed Mr Mendel.

Oh, of course not. It was just coincidence that a 77-year-old man ate 10 dumplings in half a minute then immediately keeled over dead.

* While your here  visit the rest of the Lerman report .com!

Vilolance is Violence  whet it occurs daytime or nightime