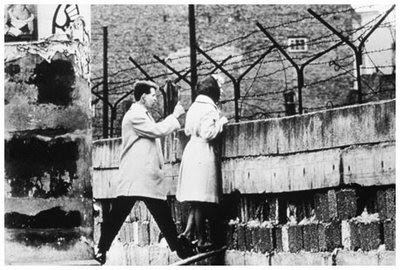 I put up this snapshot of the Berlin wall , because trying to get into the Wachovia center on Wing Bowl day for me was harder than getting into west Berlin from east Berlin through  the Berlin wall. My name was omitted from the list of contestants… I was walking with a boot cast on and a cane in sub frigid weather having a broken foot,   I had flown my  niece & nephew in from out of state came in to watch me compete in the event .My nephew who had driven me around for 2 hrs suggested that I better attempt to get in under the fence on my own or I’ll miss my contest. Having saw many documentaries on the Berlin wall I managed to make it in , However my  entourage who I flew in and put up in a hotel never made it in on time, it was because of that that I was exhausted and didn’t perform well .  No explantion was ever given to me as why my name was omitted.  .I say this was deliberately done. Everyone  in charge of the event  played stupid as why this occured..There was no apology given  whatsoever plus the cost that I concured flying in 3 people in & puting them up in hotels including the car rental all went down the drain. In retrospect  what I should have done instead of spending all my hard earned money to bring myself & my guests to Philadelphia for The Wing Bowl is that I should have took all that money over to the nearest toilet bowl and flushed it down..Its quicker & easier  bottom line is either way You’ll never see your money again./en