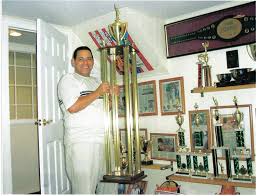 CLICK OPEN LINK IN NEW TAB TO HEAR ONLY

-The world champion competitive eater broke a new record yesterday … year in a row, the prized “mustard belt” at Nathan’s hot dog eating contest on Coney Island. … Bowl” of competitive eating, Chestnut tells U.S. News: “It’s more than a contest. … Don Moses Lerman, who was on the competitive eating circuit from 2000 to … Excerpt  read below….

Joey Chestnut on Putting Away 69 Hot Dogs in 10 Minutes

What can Joey Chestnut teach us about digestion?

Don Moses Lerman, who was on the competitive eating circuit from 2000 to 2006, compares the eating throwdowns to indulging at a buffet. You feel full, but you’re back to normal in a few hours, he says.

And yet, Lerman is grappling with a thyroid condition he says began toward the end of his speed-eating days. When he started out, he weighed 142 pounds and had a 32-inch waist; six years later, he weighed 270 with a waist size of 50. He dropped the weight, but it inched back. (Lerman does not attribute his weight woes to competitive eating.) Now at 250 pounds, he tries to eat carefully – a daily diet might consist of Chinese takeout and two apples, he says.

[See: Use These 8 Foods to Help You Lose Weight.]

And even though, at 64, he says, “I got to hang up my spoon,” Lerman still competes on occasion. Why? “This is my talent,” he says. “It may be a carnival sport, but it’s a sport.” And with that, of course, comes the glory of competition. “To win a trophy, it’s a high you can’t get from whiskey. It’s unbelievable.”

Meanwhile, these competitions may provide useful information about digestive health and “what the body can handle,” says Eric Goldstein, a New York-based gastroenterologist. “Medical science develops because someone observes something out of the ordinary once or twice … [these competitions] may mean something. I’m not sure what yet.”